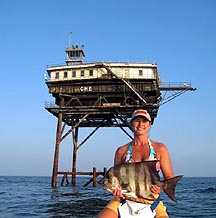 Approximately thirteen miles off the beautiful mid-Atlantic shores of Virginia Beach, Virginia stands a solitary light tower dutifully guarding the mouth of the flourishing Chesapeake Bay. Appropriately named the Chesapeake Light Tower, this key aid to navigation has served as a guiding beacon for maritime vessels for over 40 years. This historic tower has also earned the fitting reputation as a thriving seasonal host for an assortment of structure-oriented fish, the most popular of which is called the Atlantic spadefish.

Most local anglers are not aware that thirty years prior to the erection of the well known light tower, the navigational task of directing traffic approaches to the Chesapeake Bay were the responsibility of a seagoing lightship station called Lightship 116, assigned to the entrance of the bay by the US Lighthouse Service. In the approximate location where the tower currently hovers 120 feet above sea level, the well-equipped 133-foot lightship vessel stood watch from 1933 until it was reassigned to guide traffic into the Delaware Bay. Sporting a bright red hull, suitably adorned with the word “Chesapeake” in huge white letters, the all-steel constructed Lightship Chesapeake was exceptionally seaworthy, enabling the ship to remain on station during the most adverse of weather conditions, including three full-strength hurricanes!

Completed in 1965, the more cost effective light tower replaced the faithful Lightship Chesapeake after 32 years of service. This new tower was a high-tech offshore tower patterned after the “Texas-style” oil drilling platforms. Extremely sturdy, Chesapeake Light is supported by four concrete-filled steel legs buried 180 feet within the ocean floor, designed to withstand the violent sea conditions frequently presented by the treacherous mid-Atlantic waters. Originally manned by a team of four, the tower was eventually converted into an automated station, which now provides data collection for various scientific research projects, as well as sea and weather conditions as an integral link to the NOAA marine reporting system.

Although the Chesapeake Light Tower is acknowledged as an exceptional source of structure for aquatic life, the tower itself is actually situated among acres of scattered wreckage and manmade reefs. In effect, the Chesapeake Light stands as “king” over its expansive graveyard of sunken barges, box cars, tires, tug boats, and entangled masses of steel. To the delight of anglers, this submerged array of structure provides a perfect kingdom for a community of different fish species, including black sea bass, flounder, tautog, triggerfish, king mackerel, Spanish mackerel, and even super-sized cobia.

The supporting framework of the light tower also graciously hosts a mixture of seasonal species. The first of these eagerly anticipated guests arrives as the mild spring air gently erases the chill from the cool ocean waters. The debut of the earliest of the three main tower visitors, the graceful Atlantic spadefish, is warmly welcomed by eager Virginia anglers. As the spades engage the full attention of very content fishermen, the onset of summer will boldly threshold the entrance of the tower’s next seasonal guest, the emperor of all wrecks, the mighty amberjack. These massive jacks offer an uncompromising battle to those brave anglers who dare to wrestle with the overpowering beasts, which more often than not results in a trail of broken fishing line among the unforgiving tower legs. And last but not least, making its entrance quietly around September, the humble cousin of the amberjack, the jack crevelle, will choose the alluring tower framework as its humble abode for the duration of the fall. Certainly an impressive combination, this trio will rule the tower until late fall, at which time they will silently slip into the depths seeking more temperate waters.

If you ask any local saltwater angler, they can confirm that the prized Atlantic spadefish is irrefutably responsible for sustaining the Chesapeake Light Tower on Virginia’s fishing map. Dwelling around most any type of structure, spades are found all along the East coast, as well as the warm waters of the Gulf of Mexico. Considered mostly a nuisance in the Gulf, in Virginia waters, as with most fish in these parts, spadefish grow to exceptional sizes, earning a reputation as one of the most challenging fighters anglers will ever come across.
Although these elegant schooling fish have inhabited East coast waters for years, surprisingly, the now-thriving fishery has really only evolved within the last 10 years. Today, the spadefish is the one of the most anticipated fish in Virginia, thrilling anglers of all skill-levels. Each spring, as the first reports of spadefish sightings at the light tower hit the streets, the rush to intercept these summertime celebrities is utter chaos.

The average resident Virginia spade generally ranges between about 4 to 7 pounds, with many topping well over ten pounds! It’s not surprising that the massive current 14-pound world record was caught in Virginia waters. There is no mistaking a spadefish; they are distinctive beauties, with a tall flat torso glowing with an iridescent sliver color, interrupted by five or more vertical black stripes. So make sure you have your camera handy, but don’t let their charming poise and splendor catch you off guard, be warned, these fish will keep you on your toes! Stand ready for a swift, powerful creature that is quick to outsmart even the most experienced angler, leaving you with nothing to show but a broken leader. The wide-eyed look of astonishment once beaten by a spadefish is amusing, but very common. Once conquered though, your reward is by far one of the tastiest fish in the ocean.

Permanent link to this article: https://vbsf.net/articles/virginias-chesapeake-light-tower/