What Where When How, Amberjack 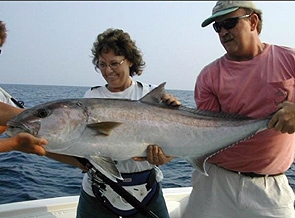 When: They show up in late June and stay through September. The minimum size limit is 32 inches and the possession limit is 2 per person. Virginia issues a release citations plaque for Amberjack measuring 51 inches or greater. 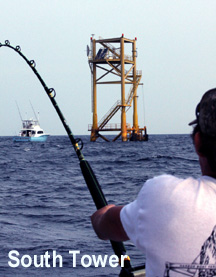 Where: You find amberjack around structure. Local hot spots include the Southern Tower, Chesapeake Light Tower, and various wrecks such as the Rick’s and the Gulf Hustler.

How: There are many ways to catch amberjack. The most consistent is fishing with live bait. Most small fish can be used for bait. Commonly used are croaker, spot, gray trout, and pigfish. Take a variety of species and sizes if you can. Make sure that they are legal. Sometimes amberjack can be very selective eaters. Day in and day out, medium croakers are a good choice. 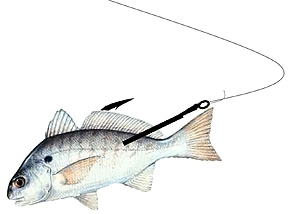 The hook is tied to a leader 60-100 lb test, 4-7 feet long. The leader is then attached to a swivel which is attached to your fishing line. Above the swivel is usually a sinker. Most thread an egg sinker on the line, I use a fish finder rig with 4-8 oz of lead. These fish can be caught on light lines or fly rods, but in general, heavy tackle in the 30-50 lb range is used. A rod belt is also good to have.

Motor up to the tower or up current of the wreck and drop your bait to the bottom or just off the bottom over the wreck. Fish with a tight drag, let the fish run with the bait a bit and then engage the reel as the boat is put in gear. If you get the fish away from the structure, you can back off on the drag. If you want to boat the fish, lip gaffing works well. Some people love to eat amberjack but most are released to fight another day.

Permanent link to this article: https://vbsf.net/articles/amberjack-fishing/