Tips For More Tuna In Virginia 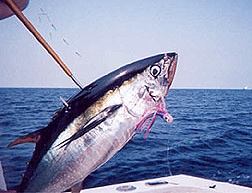 WHAT: During this “How-To”, we’ll primarily be focusing on the Yellowfin Tuna ( Thunnus albacares). Many of the tactics and fishing holes will easily transition to cover the other tunas like, Big Eye, Blackfin, and Longfin. Bluefin will be discussed separately. So lets dive in.

Yellowfin are a pelagic species found in primarily tropical to subtropical waters around the world, except the Mediterranean Sea. They can range from small juvenile fish around 15 inches to large adults over 80 inches, possibly tipping the scales close to 400 pounds. The current IGFA record sits at 388.5 pounds. Most found in our offshore waters range from 15 pounds to over 100.

Yellowfin are school swimmers, traveling with other Yellowfin or other tuna species, like Skipjacks or Big Eyes, of the same size. Larger tunas can also be found mixed with pods of Porpoise. 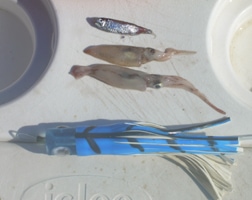 Yellowfin feed mostly on small baitfish like anchovies and small mackerels, flying fish and squid. However, they have been found feeding on crabs, shrimp and other tunas. In proportion to its total body size, tuna have relatively small mouths. They seem to favor eating more of a smaller prey which helps provide higher levels of protein for the tuna. Because of their highly migratory tendencies and the fact they can reach speeds of over 30 mph, the high protein helps fuel them. This will come into play in the selection of baits for catching tuna. They are also competitive, sight feeders. They can be triggered into a feeding frenzy by another fish’s feeding habits.

A Yellowfin has an average life span of up to 8 years. Most are sexually reproductive by the time they reach a length of 40-47 inches or 2-3 years old. Some can be mature within 12-15 months or around 20 inches. They reproduce year round, but the primary time is in the summer months. Tuna grow rapidly. At a year and a half, they can weigh 8 pounds or more. At the age of 4, they can weigh in excess of 140 pounds. 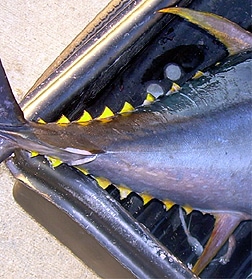 Identifying a Yellowfin can be tricky, especially juveniles. They can easily be confused with schoolie Bluefin. It is important to know the identity of the fish you’re ready to gaff. An illegal Bluefin could cost plenty in fines, not to mention, hinder the fishery’s survival. A Yellowfin has a fusiform body, meaning it tapers towards each end. It is however more slender than a Bluefin’s or Big Eye’s body, which is stocky at the shoulders. An adult Yellowfin will have longer anal and 2nd dorsal fins and are yellow in color. The older the fish, the longer these get. The quickest distinctive feature to ID the Yellowfin is their pectoral fins. The pectoral fins on a Yellowfin reach past the beginning of the second dorsal fin, but not past the end of that dorsal. The pectoral fins on a schoolie Bluefin are short and don’t extend past the middle of the first dorsal. Yellowfin are dark blue on the back with a yellow-gold stripe running laterally from head to tail. Their undersides are silvery-gray with occasional white, vertical lines and dots. The finlets on a Yellowfin are bright yellow and trimmed in black.

WHEN: From our Mid-Atlantic location, we are fortunate to be able to target Yellowfin virtually year around. We sit in striking distance to the early Spring and Winter tuna runs off the Outer Banks of North Carolina, the mid Summer blitzes out of Ocean City , MD, and the early summer and Fall runs out of our own Virginia ports. Many trailered boats, along with the larger private sportfish and charter boats, are able to follow the Yellowfin migrations. 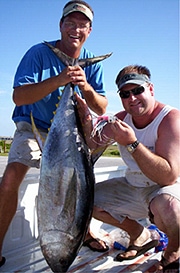 March through April find most anglers running the gauntlet that Hatteras Inlet can lay down. Here sometimes anglers find themselves at the docks because of high winds and steep surf, but once the weather falls in their favor, a short 20-30 mile run to the tuna grounds is nice. As the temperatures warm and the Gulf Stream starts to over take the cool Labrador Currents, the tuna start to move north. Oregon Inlet is now the starting point for the tuna hunt. This usually occurs from May through June. Mid June through mid July the tuna will be holding off of Virginia. Once the Summer heat appears and waters reach 80 degrees or more, the tuna are once again on the move and concentrate in the northern canyons off Maryland and New Jersey. They’ll hold here usually until the middle of October before they make their way back south with the advancing cooler waters. These times are all dependant on the weather, however. Prolonged warmer or colder temperatures can change the migration patterned by weeks up to a month.

WHERE: Yellowfin are comfortable in water temps from the 65 up to 80 plus degrees, but most are found in those midrange upper 60’s to mid 70’s. Many are caught on the surface when feeding, but they can be found below thermoclines as deep as 300 feet or more. Water depths at the most prominent fishing grounds range from as little as 15 fathoms to more than 100 fathoms. This, coupled with the wide range of water temperature tolerances, can make finding Yellowfin somewhat difficult. There are other things to look for when targeting tuna. 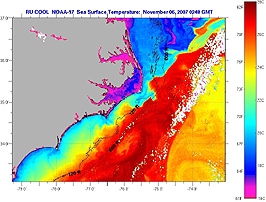 Homework is the most important tool in finding any fish, but even more so while targeting an offshore pelagic. If you’re planning on running 30 to more than 65 miles offshore, you need to be able to narrow down your starting point. The first thing many look at is sea surface temperatures. There are now numerous websites that provide satellite information regarding sea surface temperatures (SST). Some are subscription based, but several are free of charge. What you want to look for on these charts are breaks in water temperature. Finding locations that have a degree or 2, or even a 3-5 degree break are possible areas for bait to hold, and thus the tuna. Temp breaks indicate opposing currents or upwelling, currents that bring nutrients from the ocean bottoms to the surface. These areas hold plankton and small baitfish, and the one thing that tuna like, is food. On the water, these differences in temps can sometimes be visible to the naked eye. Warm waters can be deep blue, near cobalt and clear, while the cooler sides can be greenish in color. Finding these temp breaks and color changes are great places to start searching for bait and your target Yellowfin.

Also look for bottom structure. Have a chart of the area you plan to fish at home. Study it with your SST close by. Look for deep drop-offs, sea mounts, fingers, or canyons. Any area with a drastic change in bottom contour is a possible “bait motel“. These variations will cause currents to change direction or upwell, thus bringing the plankton and nutrients, to the surface where baitfish and tuna feed. Wind driven water and “currents” will also concentrate bait on one side of the structure. For example in the Norfolk Canyon, if the wind is coming out of the north, baitfish will stack up on the south wall of the canyon. The repetitive link between all these starting points” is “a change“. Finding a change in temperature, change in water color/clarity, change in bottom structure/depth, or a change in current flow can help you find the bait. And the key to finding any fish, is finding the bait.

Another great tip for finding where the tuna are is talking with those that fish everyday. Walking the docks and chatting with captains, mates, and other anglers can provide some great info. Search fishing forums like VBSF.net for reports. Don’t take it all as Gospel though. Unfortunately some out there can be less than forthcoming and may send you in the wrong direction. Taking reports and combining it with your other “homework” will better you as a fisherman/fisherwoman and teach you to find the fish on your own.

Once you’re out there on the water, there are things you want to look for while running to the “starting point” and also while trolling around. One of the most sought after sights a crew can hope to see are Storm Petrels, aka Tuna Birds. These little black birds with their white backsides are a key to finding fish. Petrels feed on plankton, small baitfish and leftovers from feeding fish. They hover over the water picking up the small scraps. They can sea fish below the surface and will follow them waiting for a tiny morsel to rise within their reach. This is a great sign that there are fishing feeding and hunting in the area.

Other visual signs of recent fish activity are slicks. These will look like someone poured a can of oil on the surface. These are actually oils spilled by baitfish being consumed by tunas. Trolling upwind or up-current of the slick may put you right in the feeding blitz. The surface ripples caused by large balls of bait are a reason to stop the boat and drop lines. If the baits are on the surface, something is working them. Busting Skipjacks, mackerels, or flying fish can mean there are Yellowfin around. Troll the outskirts of the bait balls and wait for the screaming drags.
Whales and porpoise are also great signs of life and possible tuna. Tuna are known to school with porpoise for any easy meal. Porpoise use their sonar to find balls of bait miles away. Once on the move, the tuna will follow and score a quick, easy meal. Always bearing in mind the food chain will help you find bait, and finding the bait is key to finding the tuna. There are few restaurants 60 miles offshore, so when you find one patron, there are bound to be others around.

The most obvious sign is the site of boiling tuna. When these fish are feeding on a bait ball, they will be busting the surface and feeding like mad. The tuna will be rolling and jumping out after baits. Sometimes this is a great time to cast plugs or live bait instead of trolling.

Permanent link to this article: https://vbsf.net/articles/ips-for-more-tuna/