Here some tips for catching more Spadefish in Virginia waters. 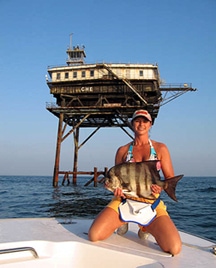 What: Ephippidae is the fish family containing the spadefish. There are about 20 species. Scuba divers sometimes mistake them for angelfish, which are similar in shape but not closely related. The Atlantic spadefish (Chaetodipterus faber) is an attractive black and white zebra-striped fish common just offshore in the southeastern United States and Caribbean.

They are a sport fisherman’s favorite because they put up a great fight as they are reeled in. Add the fact that they’re very finicky and will most likely not touch anything tossed their way on line greater than 15 lb test, they become hard to land! They can reach good size and can be seen occasionally cruising around at the surface near the bridge or other structure. They are great to eat, tasting a little like Mahi. Most individuals caught are small and young and are nowhere near the maximum size recorded for their species. 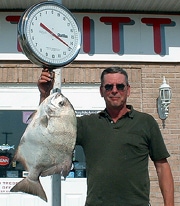 A 13-pound, 5-ounce spadefish (right) caught on May 29th 2006 by Michael K. Hanhart is the certified new Virginia state record.

Hanhart caught his fish while fishing for spadefish at Wolf Trap Light in the Chesapeake Bay. The spadefish, which measured 23.75 inches in length and had a girth of 26.5 inches, was fooled by a piece of clam being fished under a cork float.

When: Spadefish are in our waters June through September. They can be found anywhere there is structure from the Atlantic wrecks to the middle bay. Some of the best areas are the Cell, CBBT, Plantation Light, York Spit Light, the buoys at the mouth of the bay, the Chesapeake Light Tower, Tower Reef, and any wreck you can find. The Santore, Gulf Hustler, and Anglo-African are some of the wrecks that I have caught spadefish from. The 4A buoy at the mouth of the bay is the most popular, though any buoy in the area can hold spadefish.

How: The easiest times to catch spadefish are during low current and calm seas when the fish can often be seen fining on the surface. If you don’t move too fast, you can drift effectively, but most often you need to anchor. The bait of choice is clam though squid will work when the fish are real aggressive. Cut the clam into long strips with a piece of the foot in each strip. You will hear that spadefish are caught on small pieces of clam but don’t be afraid to use a good sized piece when large spades are around. I can get four baits out of a large chowder clam and maybe only two out of a small chowder clam. Hook the bait through the tough foot area and let the rest hang free. 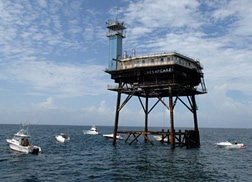 Hook size is based on the size of the spadefish in the area. They all have relatively small mouths. For small fish a #6 hook will work while you may be able to use a #1 on large fish. These fish pull hard and their mouths tear easily. They also straighten many hooks and can break your line on the nearby structure or by rubbing the line on the other spadefish in the school. 15-20lb class tackle is about as heavy as you need to go. Because of their mouths and the small hooks, you are limited in the amount of drag you can apply. You can use lighter tackle on smaller fish.

Pick the largest and strongest hook that you can get away with and tie it to a short (18-24 inch), 15-20lb leader. The other end of the leader is tied to a swivel which is tied to your main line. An egg sinker about a half of an ounce, depending on the current, is threaded on the line above the swivel.  It should be fished at the level of the fish, not the bottom. Depending on the depth of the water, lower the bait 5 -20 feet. Set the rod in the rod holder and wait for the fish to hook itself. If you are holding the rod, don’t set the hook. You may feel the fish nibble for a while before it gets hooked. If the bite stops, reel in, your bait is gone. Vary the depth of your lines to find what level the spadefish want to feed at. 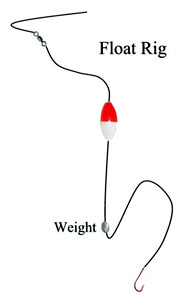 There are several other rigs that are used to catch spadefish. Many people will use a float to suspend their bait at a certain level (right). This allows them to let out more line and fish further behind the boat. One of my favorites is to use a hook with no weight or float. I cast in front of the spadefish and let the clam drift with the current, feeding out line to keep it looking natural. This works even when the fish are very timid. Sometimes, during a strong current, the fish will school right behind the boat using it as a current break. Getting bait in front of them then, with the above rigs, is difficult. I have had good luck using a normal hi-lo bottom rig with about a 6 oz sinker. This keeps the line vertical and the baits in front of their noses. The extra hardware doesn’t seem to be a problem.

Chumming will help bring the fish to the boat and in turning on passive fish. Ground clam is the best chum though cutting squid into small pieces also will work. If you have some clams left over at the end of a trip, you can freeze them and use them for chum next time. Use fresh clam on your hooks because the frozen ones are not as tough and are stolen easily.

Permanent link to this article: https://vbsf.net/articles/spadefish-the-chesapeakes-version-of-an-angle-fish/