Red Drum and Black Drum On The Chesapeake Bay

Tips for catching more Red Drum and Black Drum in Virginia’s Chesapeake Bay and along the Virginia Beach shoreline. 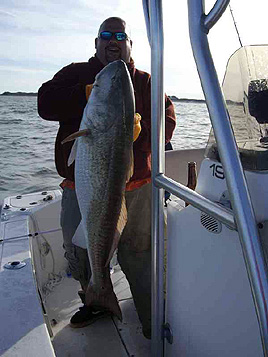 WHAT:  Drum are the largest members of the Croaker family of fish.  This family includes the Speckled Trout, Gray Trout, Spot, Whiting, and of course, the Croaker.  Members of the family are wide spread along the coast of the Atlantic and are sought after by anglers from New England to the Gulf Coast of Texas.  Even though Black Drum grow larger then their cousins, Red Drum have a stronger following among the angling world.  Fishing styles are similar for both species in our area, so we’ve grouped them together for this How-to.

Red Drum, know scientifically as Sciaenops ocellatus, also go by other names like Channel Bass, Puppy Drum, Red Bass or most commonly, Redfish.  Reds are found in coastal waters from the Gulf of Mexico, along Florida and north to New England.  Smaller fish inhabit shallow channels and inlets, while the larger fish roam the deeper waters of bays or surf zones in large schools.  They can tolerate both salt and brackish conditions., allowing all anglers, whether boaters or surf casters, access to this hard fighting fish.   Red Drum are coppery to bronze over a gray back ground.  Younger fish are more red.  Their coloring can depend on the water conditions as well, more stained water darkening the fish.  Their tails are tipped with a brilliant blue line.  The most distinguishing mark of Red Drum is the presence of a large black spot on either side of its body just before the tail.  These spots are usually about the size of an eye and are thought to confuse predators.  Some specimens have multiple spots.  Reds range from just a few pounds, called Puppy Drum, to well over 50, knick-named Bull Reds.  The current World Record stands at 94 pounds 2 ounces and was landed in Avon, NC in 1984. 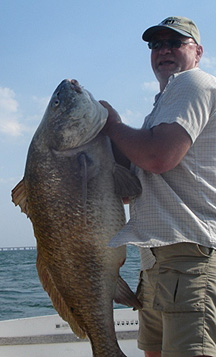 Black Drum, Pogonias cromis, or Striped Drum are found in the same areas as their cousins, but also extend along the coastal waters of the Western Atlantic to Mexico, Brazil and Argentina.  They too inhabit inshore areas near jetties, pilings, oyster beds, and marshy areas, like the Reds.  Black Drum are quickly distinguished from their cousin by the numerous barbells on its chin, resembling a beard.  Juvenile fish have 4 top 5 vertical bars that are dark in color running along their bodies, similar to Sheepshead.  As they age, these bars fade and the fish become a dark, dingy gray to black.  Black Drum do grow larger then reds do, some tipping the scales over 100 pounds.  The current World Record stands at 113 pounds 1 oz and was caught in Lewes, Delaware in 1975.

Drum get their name from the sound they create from their swim bladders, which resembles that of a beating drum.  Scientists believe its largely related to their breeding process to call out to the opposite sex.  Drum may not be the most voracious attackers of bait, but once hooked they put up one heck of a fight, just from their sheer size.  Smaller fish provide great table fare, while the larger members of the species are released for sport.

WHEN & WHERE:  Fishing for Drum usually starts around April for Black Drum and early May for Reds.  Black Drum fishing kicks off when the Dogwoods are blooming and continues usually through November.  Anglers start to search for  Drum along the coast of the Eastern Shore around the Concrete Ships, cabbage patch and some of the favored Striper haunts like the 36A Buoy and the High Rise of the Chesapeake Bay Bridge Tunnel.  Anglers can land Drum along the Barrier Islands of the Eastern Shore.  These spots are top locations during the Spring and Fall.  Another top Location for Spring and fall Drum is the Coast of the Outer Banks.  Surf and Pier Anglers battle for location along the shore for the runs of Spring and Fall Drum along the suds and shoals of the Mid-Atlantic.

The most popular time for Drum fishing spans from mid-May through the end of June.  This is when anglers hit the shoals around the CBBT, the Inner Middle Grounds, Latimer Shoals, and the Middle Grounds, or the shoals off Fisherman’s Island.  These are hot spots for night time Drum fishing.  Drum seem to feed more from dusk to dawn, though they can be taken during the day.

Drum are also targeted around the islands of the Bay Bridge Tunnel.  Schools can be seen feeding on baits around the rocks and pilings and are taken using  bucktails.  The shoals off Sandbridge are another hot spot for Drum, especially big Reds.  Little Island Pier at Sandbridge is a great spot for anglers.  Smaller Puppy Drum are favorites for anglers fishing under Lesner Bridge, the oyster beds and marsh grasses in the Lynnhaven River or the grasses in Rudee Inlet near Owls Creek boat ramp.  Now that you know Where and When, lets get to the How.

HOW:  Puppy Drum can be taken on a multitude of lures, bucktails, or spoons along the marshes, oyster beds, jetties, or pilings.  Top water plugs and artificial and live crabs or shrimp are also deadly on Drum.  Here light spinning or casting tackle can be used to cast into the grasses and beds.  Many recommend a length of Fluorocarbon to be tied to your main line.  Drum aren’t toothy critters, but the areas where you find them can be unforgiving.  20-30 pound should be sufficient.  Work quietly along the banks as Drum are easily spooked.

When hunting for those bigger Bulls from the surf or pier, cut bait, larger bucktails, crab, and larger spoons provide a great offering to the fish.  Bait can consist of Blue crab, fresh menhaden, spot, or clam.  Most like to use a fish-finder rig with a circle hook., around 7/0-8/0 depending on the size of your bait.  Circle hooks improve hook-ups plus its better for the fish since these will be released to fight again.

Trolling similar lures, like spoons or Stretch 25’s around the CBBT complex or regular Drum Haunts can provide for some good times as well.  This is primarily a day fishing technique.  Rigs are made up similar to those used for Striper fishing and consist of an in-line trolling sinker and your lure.  Weights can vary from 4 to 10 ounces and leader material is 15-30 feet of 60-80 pound test.  Attach your lure directly to the leader and slow troll around the pilings and over the shoals.  You can also use the 3-way rig you’d use for Striper fishing with a heavy cannon ball sinker on about  a 3 foot length of leader and then a 15-25 foot leader for your spoon.

The popular angling technique for Drum fishing is anchoring and chumming over the shoals.  First, you want to make sure that you anchor on top of the shoal and position yourself so your baits drift back to the deeper waters.  Once in position start your chumming.  Attaching chum bags to your anchor line and having another at the back of the boat will help fill the water with scent.  Chum can include crushed clams and fresh menhaden.  You rigs will be fish-finder rigs once again.  Attach a pyramid sinker, 6-8 oz on the slide.  Pyramids will help keep your baits in place through the moving current.  While I’m here, current is key.  You want to have moving water when fishing for drum.

Leader will range for 50-80 pounds.  Don’t make it too long as you will need to be able to cast it out away from the boat to stagger your spread of baits.  For added insurance, you can use a longer length of shock leader from your mainline to through the sinker slide to the barrel swivel, before attaching the shorter leader.  Attach you hook of choice, from 7/0-9/0 again depending on bait size.  Some anglers prefer to use standard j-hooks when using hard crabs.  Circle hooks should be used on softer baits and whenever possible to help prevent the fish from gut hooking.  The preferred bait for Drum is crab.  You want to remove the top of the shell and cut the crab into two pieces.  Run the hook through a leg hole and then into the meat of the crab.  A trick to help with spinning is to take a rubber band and wrap the legs along the shank of the hook.  You can also use fresh chunks of menhaden or spot.  Set you baits, remembering to stagger them behind the boat.  There’s no need to hold the rod the entire time.  Set the reel in gear with very little drag.  Make sure your clicker is on and holster the rod and wait for that run off.  You must know what hooks are on what rods as the setting will be different for each.  If a circle hook, reel down and lift slowly to set the hook after letting the fish eat for a moment.  J-hooks will require a standard hook-set.  Drum can be light hitters so pay attention to the spread.  Once hooked, tighten the drag slowly to Strike and enjoy the fight.

Bring along a big net, as you will need for these fish.  These fish can be topping 50 pounds.   Try to support their bodies as much as you can to prevent injury to the fish.  Snap a couple of trophy pictures and return the fish to the water as quickly as possible.

Permanent link to this article: https://vbsf.net/articles/red-and-black-drum/