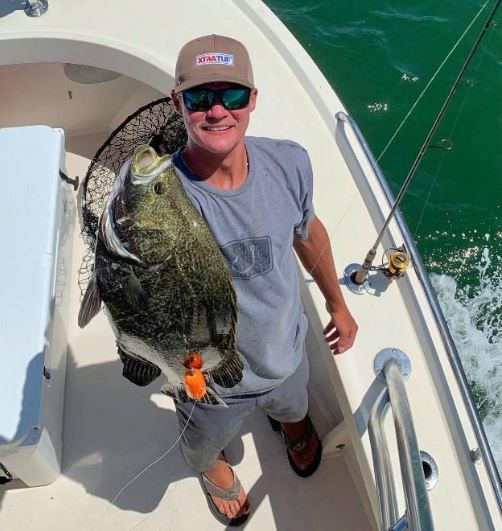 An 8-pound 9-ounce Atlantic tripletail caught on July 14, 2021 by Hayden Head of Yorktown; VA has been certified as the initial Virginia State Record for the species by the Virginia Saltwater Fishing Tournament. The record-setting tripletail measured 23 inches (TL) and had an18.5-inch girth.

Hayden, his dad and four other anglers were primarily searching for cobia but spotted the fish hanging below a matt of grass at York Spit near the MB 1 buoy. Hayden rigged a live crab on a 3-foot leader suspended beneath a large fluorescent orange cork and cast to the fish which quickly responded. The fish was netted boat side by a young member of the group.

Hayden was using a Temple Fork Outfitters spinning rod and a Penn reel spooled with 30-pound Power Pro braided line.   The fish was officially weighed at Grafton Fishing Supply in Yorktown, where it was viewed and positively identified by VSWFT Committee member Dr. Ken Neill.

Tripletail are not a new arrival to Chesapeake Bay waters but, with the rise in the popularity of sight fishing for cobia, encounters seem on the increase.

Atlantic Coast tripletail have been collected as far north as Massachusetts but are only rarely found north of the Chesapeake Bay. In more southern states, and especially in Georgia and Florida and the Gulf States, tripletails are highly esteemed by recreational anglers for both the challenge they offer and as a table fish.  Their flesh has been compared to other mild tasting white fleshed fish as snapper and grouper. Tripletail were added to the list of eligible species for state record consideration in 2020 with an initial qualifying weight of 8 pounds. No entries were submitted that first year. Hayden’s fish is the first tripletail registered which met the 8-pound minimum established for initial state record recognition.

Permanent link to this article: https://vbsf.net/2021/12/22/state-record-atlantic-tripletail-certified/