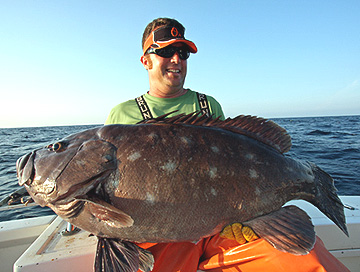 Roger Burnley of Virginia Beach, Virginia has established a new state record for snowy grouper with a 70-pound, 7-ounce fish caught May 22, 2011. The record fish was weighed and certified on an Ohaus digital scale at the office of the Virginia Saltwater Fishing Tournament, located in Newport News. The digital scale registered 70.48 pounds but the weight was converted and listed as 70 pounds and 7-ounces as the state record. The record-setting grouper bested the existing state record, set by Jere Humphrey of Norfolk, Virginia, on August 17, 2008, by nearly 2-1/2 pounds. Burnley is filing an application with the International Game Fish Association (IGFA) for acceptance of his catch as the IGFA All-Tackle Record for snowy grouper. Humphrey’s 68-pound snowy grouper currently holds the IGFA All-Tackle Record.

Burnley caught his grouper “deep-dropping” near the Norfolk Canyon in 98 fathoms of water while fishing aboard the private boat Healthy Grin, skippered by Ken Neill, III, of Seaford. The fish had a length of 48 inches and a girth of 37 inches. The record fish was caught on a Shimano Trevala rod, mated with a Daiwa Saltist LD40 reel and spooled with 70-pound test Daiwa Saltiga Boat braided line. The record-setting grouper hit a custom made two hook bottom rig baited with squid and cut fish.

Snowy grouper was added to the list of species eligible for state record recognition by the Virginia Saltwater Fishing Tournament Committee at their fall meeting in 2006 and carried an initial qualifying weight of 38 pounds. Roger Burnley of Virginia Beach registered Virginia’s first qualifying snowy grouper, at 49 pounds, 9 ounces, on April 29, 2007. Burnley’s record was eclipsed within days, on June 10, 2007, by Bob Manus of Ark, Virginia, with a 65-pound, 8-ounce grouper. Manus’ record status held until Chris Boyce of Hampton caught a 66-pounder later that year December 2007. Boyce’s record grouper lasted for 8 months before Humphrey landed his 68-pounder. The last three fish were later certified as IGFA All-Tackle Records for snowy grouper. The four prior record snowy grouper were caught in the general vicinity of the Norfolk Canyon “deep-dropping” in over 50 fathoms of water and using either whole or cut fish for bait. Additionally, five of the six state record grouper were caught aboard the Healthy Grin skippered by Ken Neill.

Permanent link to this article: https://vbsf.net/2011/06/02/snowy-grouper-state-record-broken/ 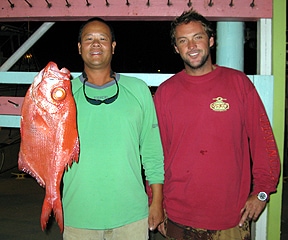