To Catch A Doormat 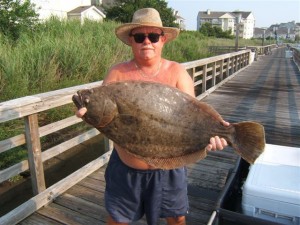 An all-time record of 78 summer flounder weighing ten pounds or more were registered for trophy fish citations in Virginia last year. I spoke with the director of the Virginia Saltwater Fishing Tournament, Claude Bain, III and asked him what was going on. Why are so many big flounder being caught? He said that there were a couple of factors. One is that the management plan is working. Spawning biomass has nearly tripled since 1991 which means there are more big flounder out there to be caught. Another factor is that more anglers are learning to fish the structure where large flounder are concentrated. We are not talking about drifting along some channel edge type of structure. We are talking about the kind of structure where, unless you are losing some tackle, you are not doing it right type of structure.

The classic way Virginia anglers have caught flounder in structure has been by trolling with wire-line tackle. While most flounder fisherman are drifting around, wire-line trollers have caught the largest flounder for years. This technique can be used to fish any structure. The Cell and the Cape Henry Wreck are two good locations to catch doormats while using this technique. The structure which seems to have been created for this method of fishing is the Chesapeake Bay Bridge Tunnel (CBBT). Dr. Bob Allen has been wire-line trolling for decades. When fishing for flounder, his terminal tackle consists of a 3-way swivel with a 3-foot dropper to a sinker heavy enough to stay on the bottom. He likes to use a long, 25-foot, leader to his bucktail jig. A long strip bait is placed on the jig. Any fish can be used to make the strip bait, bluefish and flounder are both good. The entire span of the CBBT can be productive. The high rise area, in particular, produces large fish each year.

Wire-line trolling is a lot of work. It takes good boat handling skills by the captain and a deft touch by the angler. If your bait is not on the bottom, you will not catch fish. If you just drag your sinker in the structure, you will be hung up all of the time. The angler must maintain contact with the bottom without getting hung up too much. It takes a lot of effort. You must “feather” the bottom, constantly letting out and reeling in line as the depth changes. The captain must maintain proper boat relationship with the structure. It was a common sight for years at the CBBT to see Dr. Allen in the fly bridge of his sportfisherman, driving the boat and working his wire-line rod at the same time. I have never seen anybody else able to do that. Many of the best wire-line fishermen are no longer with us and those that are…well, they are old. I’m going to hear it for that one. Many beginners who try this technique find it to be too much work and very frustrating and they soon give up on it. This is becoming a lost art but if you are in a flounder tournament and see an old salt with wire-line tackle, don’t bet against him. Better yet, see if he will take you fishing. Once mastered, this technique is deadly. 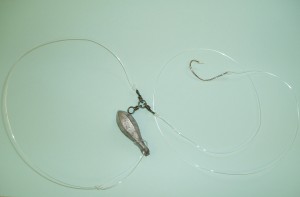 A few years ago, a group of anglers from Poquoson, Virginia started bringing in some very impressive catches of flounder. There were trips where all of the fish brought back to the dock were large enough for citations. These guys started to dominate the local flounder tournaments so of course, we wanted to know what in the world they were doing. We watched them while they were catching some of these fish and eventually were able to convince a few of them, like Craig Freeman, to teach us what they were doing. Instead of drifting or trolling for flounder, these fish were being caught while anchored. This will work on any structure but it started out at Back River Reef. The basic technique is to anchor to the structure with a wreck anchor and fish with live bait, usually spot or mullet. Like with wire-line trolling, a 3-way swivel is used. The drop to the sinker is about a foot long with a 2-3 foot leader to a Kahle style hook. You cast your bait up-current and allow the current to walk the bait back along the structure and put the rod in the rod holder and cast out another rod. This technique works best when there is some current but not too much. Use as light a sinker as you can get away with and stay on the bottom.

About this same time, a similar technique was being used to catch big flounder in structure and it was perfected by Capt. Craig Paige. Craig has been a victim of his own success. He is an expert at catching most of Virginia’s fish but he is so well known for his catches of monster flounder, that he stays booked all of the time for flounder trips and does not get to spend much time fishing for his other favorites. Craig also uses live bait to fish structure but he does not do it while anchored. He will use his boat’s engine to hold the boat in the area he wants to fish and fishes his lines straight up and down. This technique also will work on any of the structures out there. Some good spots along the CBBT for this are at either ends of the 3rd and 4th islands and at the pilings of the first pull-off north of the 4th island. He uses a 3-way swivel, a 10-inch drop to his sinker, and a 36-inch leader to a Kahle style hook. His favorite baits are spot, croaker, and mullet in the 3-6 inch range. Capt. Paige’s charters account for a significant percentage of the flounder caught weighing in at over 10 pounds.

Any of the reefs, wrecks and bridges can hold big flounder. Some of the best are the Cell, Back River Reef, the Chesapeake Bay Bridge Tunnel, and the Cape Henry Wreck. During the fall months, structures in the ocean waters are loaded with big flounder. These areas include the Tower Reef, the Triangle Reef, and the Brass Spike. Detailed information about Virginia’s reefs can be found at: www.mrc.virginia.gov/vsrfdf/reef.shtm .

Virginia’s record flounder is a 17 pound, 8 ounce fish caught by Charles Cross in 1971. For years, this seemed like an untouchable record. Now, it seems to be just a matter of time before this record is broken and when it is, it will likely be a fish pulled from one of the many structures which are home to some truly huge flounder.

Permanent link to this article: https://vbsf.net/articles/virginia-flounder/flounder-continued/