Virginia Beach and the Lower Chesapeake Bay are world famous for saltwater fishing!

Large Red Drum in the 30-pound-plus range are caught here more often than any other spot on the East and Gulf Coast.  A popular flatfish both in Virginia & North Carolina is the Summer Flounder. Flounder fishing here is second to nowhere else! Hugh Cobia hang around the Bay all summer. Fighting a monster Cobia on the Bay is the challenge of a life time.

In the summer months, offshore fishing from Virginia Beach is excellent. Yellowfin tuna like deeper water for the most part, often being caught in water from 30 to 100 fathoms. 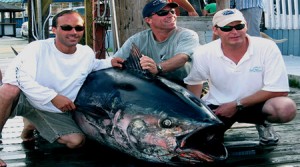 Offshore fishing spots include the Norfolk Canyon, Cigar, Weather Buoy, Wayne’s World and others. These hotspots range up to 75 miles off the coast.

Of interest to many anglers are the trips that reach the Norfolk Canyon. Just before reaching the canyon walls are slopes that are often very productive areas. Near the canyon walls, the bottom becomes steeper and rockier. Fish congregate along the drop offs to catch food that is caught in the hard running current. Along the edges are lobster traps which are marked by orange buoys or “lobster balls”. The buoys attract dolphin fish which in turn attract the larger marlin, swordfish and sharks which feed on them heavily. A trip by a buoy can be uneventful, or one or more lines might be attacked by mahi mahi, tuna, marlin or other fish.

After the offshore season winds down, Virginia anglers enjoy excellent striped bass fishing. Known locally as rockfish, these delicious fish migrate down the East Coast and congregate in the lower Chesapeake Bay and coastal waters from November thru March. Anglers sometimes catch monster rockfish, exceeding 50 lbs. The Virginia state record rockfish has been broken many times recently, with some of the biggest fish being caught out of Virginia Beach Virginia.

Permanent link to this article: https://vbsf.net/articles/virginia-beach-deep-sea/