Return to Giant Hatteras Bluefin From a Small Boat

Put your boat in at Teaches Lair (888) 868-2460 , pay the 7 dollar ramp fee and buy a Hatteras map. They have the wreck numbers on the map. The inlet out of Teaches Lair is tricky. The best method is to follow someone out. You have a small channel that runs between the Teaches Lair and the Ocracoke Ferry channel . Then you simply follow ferry channel out 200 yards from the shore and then turn left for 2 miles to parallel the coast to the Hatteras inlet.

The fish typical bite at the wrecks at the shelf drop off. The heading is nearly 180 degrees south. You will go about 25 miles south from the inlet. The Proteus seem to be the best wreck and its loran numbers are on the map you can buy from Teaches Lair Marina. But any of the wrecks in 120 ft of water in this area should hold bluefins at this time of year.

When it is rough and the fish will bite anything, I use 600 lb leader with a barrel swivel and a hook. It is best to have a short leader of about 4 feet because this is safer on a small boat. The big advantage of using a leader is that you now have a big 400 lb ball bearing barrel swivel between you and the fish. Bluefin tend to swim in large diameter circles at the end of the fight. Also, If you use a big 12 aught hook, you will get a clean mouth hook.

If the day is flat , there are lots of boats, and the fish are spooky, I tie the wind on leader directly to the hook. I actually like this best because you can reel the fish directly up to the boat, so it is very easy to gaff the fish and you don’t need an experienced lineman.

When you arrive above the wreck, you need to have about three boxes of menhaden on board to chunk with. You can buy it in Hatteras from Jeffrey Seafood. But I recommend you call your local seafood shop and ask them to order you some. They all can get it, and it will cost about 10 bucks a 20 lb box at most. This way you don’t drive to Hatteras and have to sit out the day looking for bait.

I found that on the choppy days, the fish take anything thrown in the water. On the flat days they get picky. I found that the hooks are very heavy, and the baited fish tend to drop quicker than the rest of the chunks. So I switch to smaller 10 aught hook that is lighter. I then take a foam beer cooler and cut it into triangular strips. Then I fold back the gill plate on a healthy looking manhadden and use a knife to hollow out a cavity for the foam. If you don’t make the cavity, the soft flesh of the menhaden will split. I stuff the foam behind the gill into the cavity and wrap a rubber band around the fishes midsection to hold him together. I insert the hook in the gill opening, and push it inside the fish with to hide it. I then take another rubber band and wrap it around the line and loop it behind the gill plates. The rubber bands are nearly invisible, and the whole process takes about 2 minutes.

Put out The line.

When you have a drag setting of 50 lbs, even in free spool the drag is about 10 lbs. It is a real pain to pull out the line and get the bait out about 75 feet. I then handline it back in making sure the line goes back in the water. Then I throw the bait about twenty feet from the boat with to full bunker as chunks. the bait and the chunks should float out of sight together.

I try two methods. I use a big hook and use fully dethawed bunker. These sink down at about the same rate and can be fished down about 20 feet. The other method is to fill the bait with foam, use a smaller hook, and then throw frozen bunker in. The frozen bunker will float along with the bunker on the surface.

When the fish gets on, you need to set the hook. If your are older and wiser, leave the rod in the rod holder, put the drag on strike and floor the boat to set the hook with the boat. Try to pull the hook. If it pulls, go back and get another one. Otherwise you now have a nice hook up. If you are young and stupid. Grab the rod, strap yourself in a harness, put the drag on strike and jerk three times. You are guaranteed to get nearly pulled in the water. Have a buddy hold the back of your harness for stability. I have a twenty foot rope tied to the reel eye for safety purpose, you need to have one too. This is really dangerous without a rope for backup. You should be able to last about 20 minutes until you have to back up off the drag, or decide to drop the rod in the rod holder. If you back down on the drag, expect the fight to last 2 hours and you take more of a chance of hurting the fish if you want to release him. I feel no shame for letting the boat fight the fish with the rod in the rod holder. Remember, you are not in a 60 ft sportfisher, and just getting to the point where you are now is a hell of an achievement. Don’t blow it by trying to be brave and ruining your back. 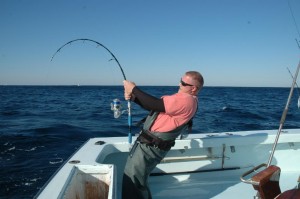 The big tuna will take about 200 yards of line off line the first 2 runs, Then you should be able to simply drive over top of him and reel in the line onto the 200 feet of 200 lb wind on leader. Now you can crank that drag up to full and crank him strait in. There is a secret to tunas to get them in quickly at this stage. If you try to drive the boat and keep him at 45 degrees off the stern and then drag him till he tires like you do smaller fish, then you are barking up the wrong tree. These big brutes will use the “trash can” effect on you. The will simply point their fins down and their body will act like a huge planer and it will take hours to get them in. But if you stop the boat, drop the reel into low gear (the low gear is really a must for this technique) the you can get their nose pointed towards you and you can drag them strait at you. When you pull hard on their nose and drop their speed below 3 mph, they can’t control their direction well and you can use this to shorten the fight dramatically. They will even pop up out of the surface like a huge submarine. Just gaff them when they come by the boat. They will spin in a circle on the way up when doing this maneuver. The driver should be spinning or backing the boat to keep the fish from spinning too far under the boat. We have one guy with the normal gaff “Guarding the engines” at this point to keep the fish from wrapping the line in the props.

The rod man reels the swivel all the way to the tip and backs across the boat. The line man pulls on the leader to point the fishes nose-up and along the side of the boat while dropping the leader in the water. The gaffman then places the gaff under the chin of the fish and pulls up when the fish passes in range. The gaff man then pins the fish next to the boat. The Tail Wrap Man guards the engine with the normal gaff, then jumps forward and gaffs the tail with the small gaff. He pulls the tail out of the water and wraps a slip knot loop around the tail, pulls the rope tight and the fish is secured. I have found that these big fish are not like big marlin and don’t seem intent on killing you once you flying gaff them. The fish brought in was very peaceful once he had the flying gaff in him, but the Tail Wrap Man needs to scope the strength of the fish before sticking him in the tail with the small gaff.

Getting him in the boat. 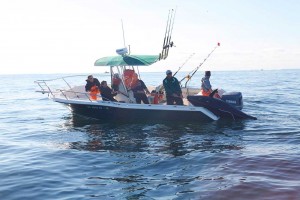 If the fish is under 300 lbs, you might be able to drag him over the gunnel with a tail rope and three people. If he is larger, then you need a come-along to winch him in. I have found that a come along is a lot easier to use than a block and tackle set up because once it is set up, one person can operate it. Take the handle of the flying gaff and place it in a rod holder on the opposite side of the boat from the fish. Wrap a length of rope around it three times and tie a bowline. Wrap the tail of the fish a few times and secure it with a bowline. I use bowlines because they don’t slip and untie easily. Lift the tail of the fish as high as you can and then hook the come along to the rod holder loops and the tail loops. Clear the deck and crank the fish over the side. Be careful when it flops into the boat, the fish can break a leg with its tail if a wave slaps across the deck onto someone’s leg.

Clean Up and Check in.

Rinse the boat off and head for home. When you get to the dock you will need to call the coast guard station (252-986-2175) to tag the fish. Their station is a few hundred yards from Teaches Lair and it takes only a few minutes for them to come. They will measure it, give you a weight estimate, and then log the fish in a log book. Now you can clean the fish.

The easiest way to handle a fish this big is to clean it in the boat. You clean it with the same techniques as with smaller tuna, just on a larger scale. You will need 80-100 ziplock bags and it will take and hour and a half. I had heard the rumor that giant bluefin did not taste any good and this is simply not true, they are fantastic. This has to be a rumor created by the commercial fishing industry who want to sell the fish to Japan. We did find that the redder meat near the center of the fish tasted best. And as the meat got nearer to the skin, it turned whiter and had a higher fat content.

A good tip is to fill a small cooler with water next to your ziplock packing assembly line. Then put a little water in each bag while immersing the entire bag under the water before you zip it. This will force all the air out of the bag and give you a vacuum type seal. Also, a little water in the bag will prevent freezer burn. This also washes a lot of the fishy smell off each bag. Get the blue and yellow ziplocks so you can see if you have a good seal.