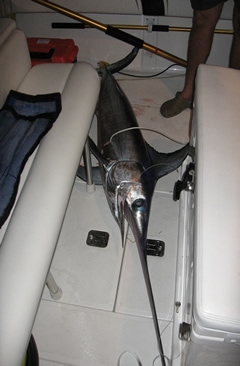 The commercial swordfish industry has a long history, and many nations contribute to the harvesting of swordfish for commercial purposes. Swordfish fisheries in the Atlantic Ocean rely mostly on long lines, although the fishery began as a harpooning industry. Long lines consist of a main line adorned with thousands of baited hooks, reaching lengths of up to 30 to 70 miles. These long lines are supported within the water column by a buoy system. Unfortunately long lines are indiscriminate, so by-catches of undersized swordfish and other marine species such as turtles and marlin are common.

In 1948, the world’s commercial swordfish harvest consisted of 7,000 tons of fish, and continued to grow steadily each year. The world harvest count in 1970 was up to 37,000 tons of swordfish. But that year, reports of high mercury levels in swordfish frightened many consumers, and prompted strict regulation of the sale of these fish by the FDA, causing demand to decline significantly. Once the FDA raised the acceptable level of mercury in 1979, and later updated its stance on mercury level enforcement, the fear of contamination subsided and swordfish harvests catapulted to counts in excess of 80,000 tons of fish per year. This massive harvesting created immense fishing pressure on the worldwide swordfish populations.

Management of the swordfish is no simple feat. Since these fish cross international boundaries, worldwide cooperation is crucial for successful management of swordfish. The organization responsible for the joint coordination of Atlantic swordfish management is the International Commission for the Conservation of Atlantic Tunas, or ICCAT. This organization consists of over 30 members, including the United States. In addition to ICCAT, the National Marine Fisheries Service supplements swordfish management actions domestically, ensuring continued compliance with ICCAT decisions.

In the 1980s, data suggested a severe decline in swordfish populations due to decades of heavy fishing pressure. In 1999, ICCAT introduced a 10-year recovery plan designed to rebuild the stock of north Atlantic swordfish. Aggressive monitoring and management efforts were implemented to encourage the recovery of the stock. The United States worked with the domestic and the international fishing community in a strong push to support the rebuilding plan through ICCAT, which included cuts in total swordfish catches and implementing measures to protect juvenile swordfish stocks by closing many nursery areas to fishing.

The recently introduced 2006 ICCAT swordfish data suggests that the north Atlantic swordfish fishery is almost completely rebuilt, and currently sustains low mortality rates. With this outlook, the NMFS is considering an adjustment in the swordfish management measures this year. The goal of this potential modification of the recovery plan is to implement management measures that will enhance opportunities for U.S. anglers to harvest domestic north Atlantic swordfish quotas with limited environmental impacts.

The Atlantic swordfish is an amazing being, casting a shining example of a successful global conservation effort.

Permanent link to this article: https://vbsf.net/articles/atlantic-swordfish-virginia/swordfish-continued/