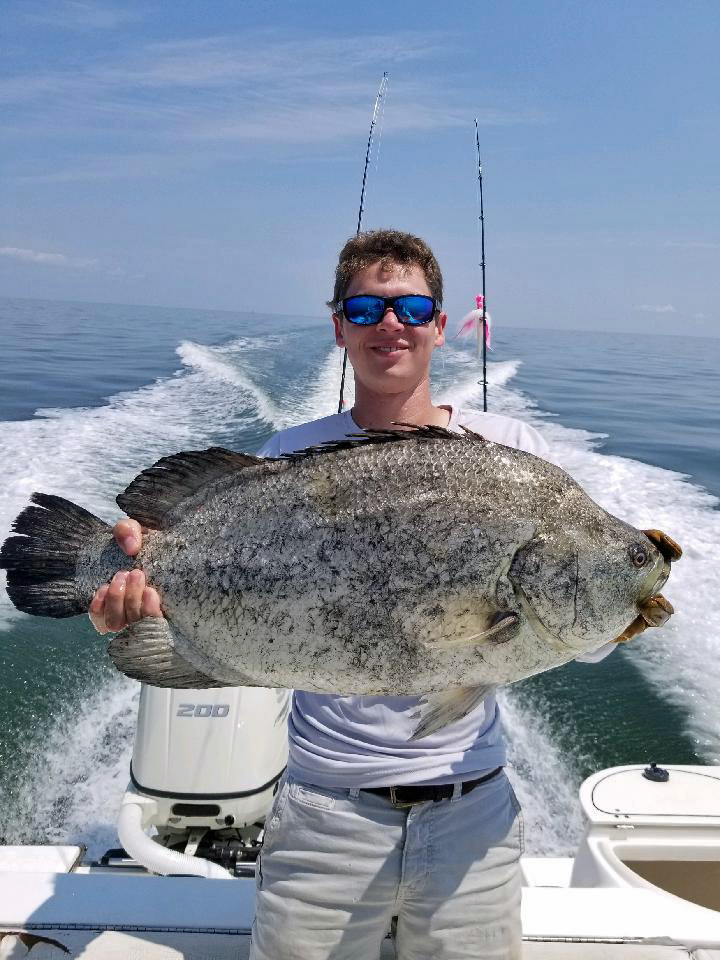 A 16-pound 12-ounce Atlantic tripletail (Lobotes surinamensis), caught on July 23, 2021 by Richard H. Stuart Jr, of King George VA, has been certified as a new Virginia State Record for the species by the Virginia Saltwater Fishing Tournament. The record-setting tripletail measured 28 inches (TL) and sported a 23-inch girth. Richard Jr. and his dad, Richard Stuart Sr., were primarily sight fishing for cobia in the vicinity of York Spit Light, when Richard Jr. saw a flash at a distance. Instinctively he piloted the family’s private vessel, Fish-On, over to take a look. The pair were able to approach close enough to identify the “flash” as a tripletail and Richard Jr. pitched a 2-ounce cobia jig near the fish. That initial offering was ignored. A second cast put the jig on a path closer to the fish and as jig passed the tripletail the response was a solid hookup. After a spirited 10 minute back forth tussle the fish was brought boatside. The catch was made on gear suitable for cobia, a Shimano Tetramar XX spinning rod mated with a Shimano Twin Power SW 5000 spinning reel spooled with 40-pound Power Pro braided line. The fish was officially weighed at Grafton Fishing Supply in Yorktown and viewed and positively identified by VSWFT Committee member Dr. Ken Neill.

Tripletail are not a new arrival to Chesapeake Bay waters but, with the rise in the popularity of sight fishing for cobia, encounters seem on the increase. Along the Atlantic Coast tripletail have been collected as far north as Massachusetts but are only rarely found north of the Chesapeake Bay. In more southern states, and especially in Georgia and Florida and the Gulf States, tripletail are highly esteemed by recreational anglers for both the challenge they offer and as a table fish. Their flesh has been compared to other mild tasting white fleshed fish as snapper and grouper.

Tripletail were added to the list of eligible species for state record consideration in 2020 with an initial qualifying weight of 8 pounds. No entries were submitted that first year. Stuart Jr.’s fish replaces the initial state record tripletail, an 8-pound 9-ounce fish caught by Hayden Head earlier in July and caught in the same vicinity.

Permanent link to this article: https://vbsf.net/2022/06/09/state-record-atlantic-tripletail-certified-2/