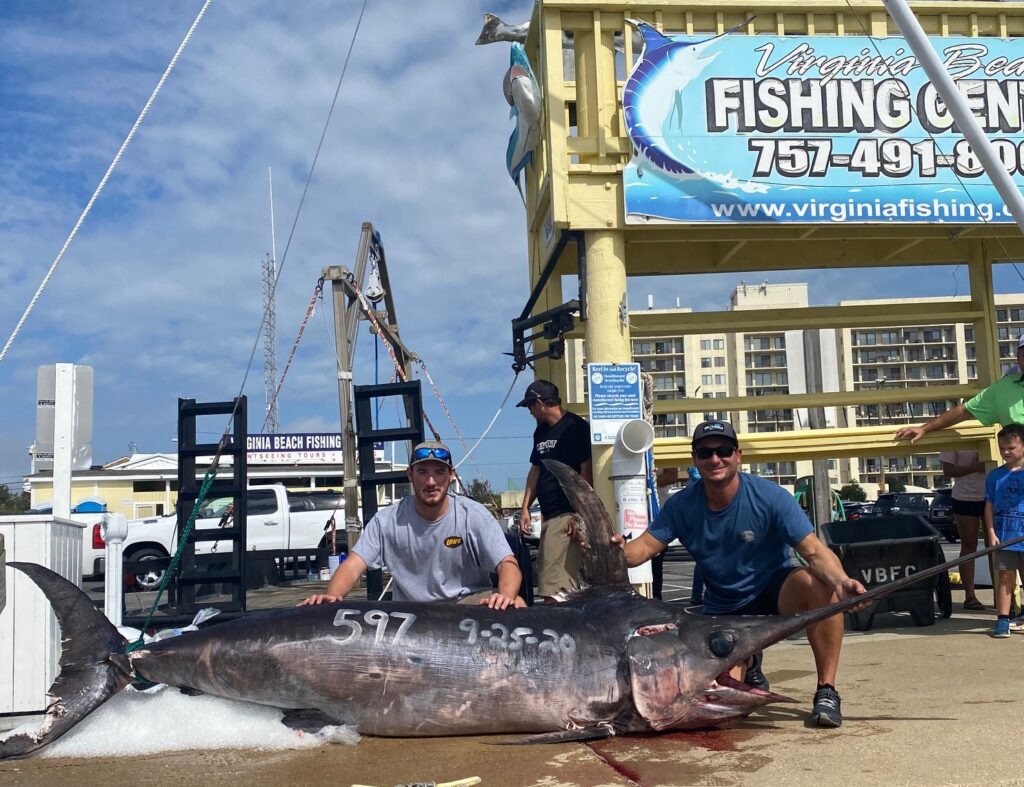 A 597-pound swordfish, caught September 25, 2020 by Nicholas Kontodiakos of Norfolk, VA, has been certified as the new Virginia State Record by the Virginia Saltwater Fishing Tournament. Kontodiakos’ catch surpasses the existing record of 466-pounds, caught on August 16, 2019, by Tony Gower Jr. of Virginia Beach, VA.

The record setting catch was made off Virginia Beach while drifting along the southern edge of the Norfolk Canyon in 1,000 feet of water during a daytime deep dropping trip for swordfish. The massive swordfish hit a bait suspended at about 800-feet.

Kontodiakos, a rescue diver for the Navy, and fishing buddy Trey Wallace, with part time experience as a charter boat mate, left Rudee Inlet at 4:30 AM aboard the angler’s 2007, 29-foot SeeVee. After arriving at their designated location they made several long drifts and had a couple of bites that did not come tight. The lines were set for “one more drift” before they planned to head in for the day to arrive at Rudee Inlet shortly after dark. But at 3:30 PM those plans changed as the deep “buoy rod,” with a rigged dolphin belly on a blue and white skirt, came tight. After wrestling with the fish for nearly 5 hours it was clear it was a large swordfish, and when the fish was finally secured at the transom, they began to relax. But securing the fish to the transom was just round one. Round two would consist of couple of hours of stop and go, inching the fish onto the deck on each stop, tying it off and then running until they were recovered enough to resume their tug of war. Finally, with the fish on the deck and the tuna door closed, it was non-stop to Rudee Inlet.

Kontodiakos’ passion to land a swordfish began 10 years earlier while living on the east coast of Florida. He admits “I had no idea how to go about catching them.” After moving to Virginia Beach and realizing there were swordfish to be had off the Virginia coast some 60 miles plus, “I decided I needed a bigger boat.” Unfortunately, even with a bigger boat, his lack of success in Florida had tagged along to Virginia. It got so bad he sometimes had to settle for fishing alone. “No one wanted to fish with me because I never came back with any fish.” Relentlessly perusing information on the internet to aid in catching a swordfish plus talking to successful anglers along the east coast for additional insight eventually began to payoff and his success improved markedly in recent years. “I think I’ve caught a swordfish in every month of the year except maybe January.”

It was nearly midnight when the pair pulled inside Rudee Inlet. A call had already been made to alert the Virginia Beach Fishing Center of the catch and the boat’s bow was pointed straight to the Fishing Center’s main dock. Representatives from the Fishing Center were at dockside to assist and a small crowd of interested onlookers had already assembled despite the late hour.

The mammoth swordfish would weigh an incredible 597-pounds–besting the former state record by 131 pounds! The fish measured 180 inches total length with a lower jaw fork length of 111 inches while sporting a hefty girth of 69 inches. Kontodiakos used a custom Joe Leffler 80-pound class rod, teamed with a Shimano Tiagra 50 reel, spooled with 80-pound PowerPro braided line and topped off with a 25-foot, 250-pound Moni mono leader with a Mustad 7691, 11/0 hook, attached to the business end.

Permanent link to this article: https://vbsf.net/2021/01/20/virginia-state-record-swordfish-crushed/