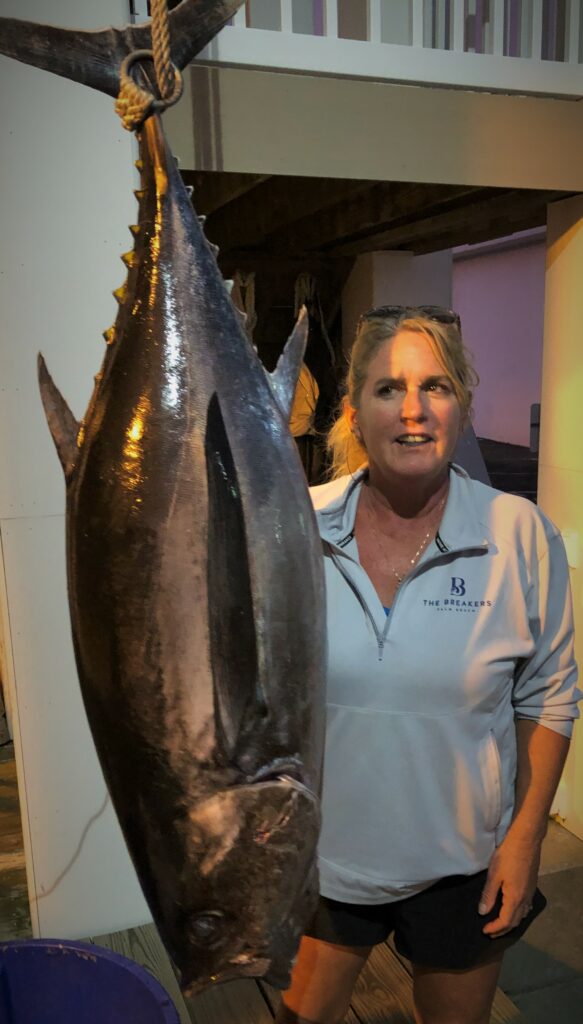 A 70-pound 11-ounce Albacore Tuna, sometimes referred to as “True” Albacore or Longfin Tuna, caught on September 22, 2019 by Wendy Brockenbrough of Virginia Beach, VA, has been certified as a Virginia State Record by the Virginia Saltwater Fishing Tournament.

Brockenbrough caught the record tuna while deep dropping for swordfish at the Washington Canyon aboard the private boat Sea Trader skippered by Shey Mahoney. The record catch was made using a 50-pound class custom rod mated to a Shimano 80 reel loaded with 100-pound braided line and baited with a large strip of fresh dolphin belly. Seated in the fighting chair Ms. Brockenbrough was able work the fish to the boat in about 20 minutes. The fish was checked-in at Fisherman’s Wharf Marina, registering 70 pounds and 11 ounces on a recently certified digital scale. The tuna measured 52 inches in total length, had a 47-1/2-inch fork length and sported a 34-inch girth.

Brockenbrough’s catch erases Virginia’s initial and current state record of 68 pounds, set September 2, 1992, at the Norfolk Canyon by Irv Fenton, Jr. The IGFA All-Tackle World Record stands at 88 pounds, 2 ounces and was caught off the coast of Spain in November 1977.

Permanent link to this article: https://vbsf.net/2019/11/06/va-state-record-albacore-tuna/