A 466-pound swordfish, caught on August 16, 2019 by Tony Gower Jr. of Virginia Beach, VA, has been certified as the new Virginia State Record by the Director of Virginia’s Saltwater Fishing Tournament.  Gower’s catch surpassed the existing record of 446-pounds, caught in October 2012, by Joseph T. Harris, of Virginia Beach. Gower made the record catch off Virginia Beach while drifting along the south edge of the Norfolk Canyon in 250 fathoms of water.  The party was fishing with Captain Randy Butler aboard the Rudee Inlet based charter boat Rebel, a 60-foot custom built Richie Howell.  The record setting swordfish hit a whole drifted tinker mackerel suspended at 20 fathoms.  Gower was using a custom 80-pound class rod, teamed with a Penn 70VIS reel spooled with a 200 yard top shot of 100-pound Berkley Pro Spec mono while the leader consisted of 250-pound mono with a 12/0 Eagle Claw hook on the business end.  The backing was 100-pound braid. 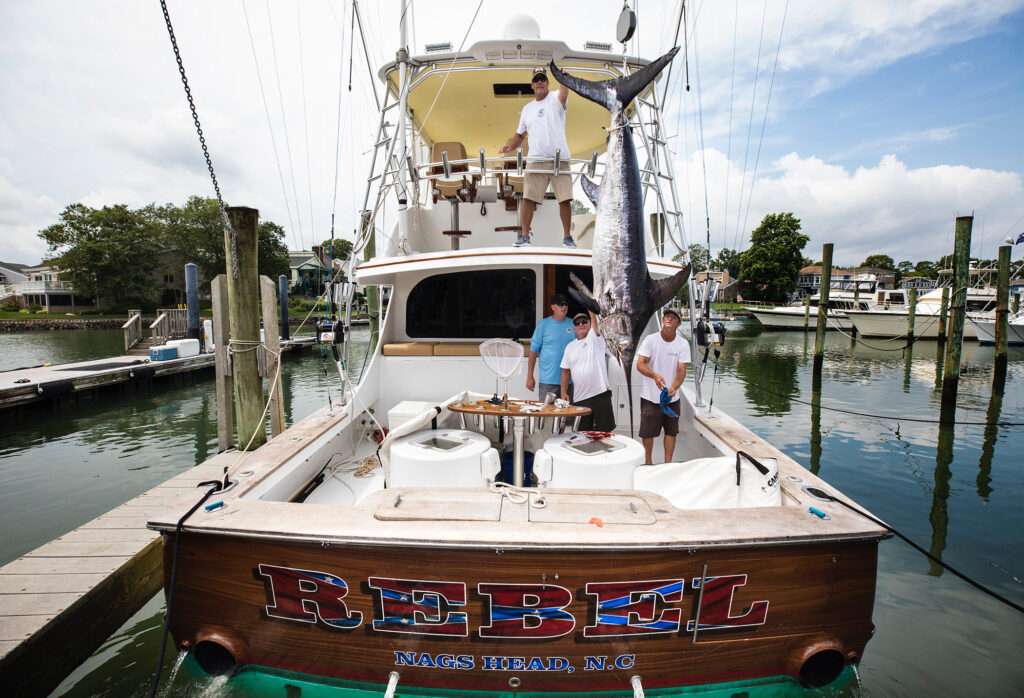 The party, which consisted of five members from upper level management of the local company Ocean Drywall, departed Rudee’s Inlet Marina at a causal 9 AM and preceded to the Norfolk Canyon area to deep-drop for tilefish and blackbelly rosefish.  With a good catch of tilefish and blackbelly rosefish in the box, and darkness approaching, the group readied to spend the night drifting for swordfish (their real mission).  A full moon was scheduled but because of overcast skies and scattered showers it was a pitch dark night.  The first strike of the night resulted in a dusky shark that was released after a spirited fight.  As wind and rain increased all lines, except one were reeled in to prevent tangles.  It was approximately 3:30 AM when the next strike came.  Gower, an experienced offshore angler who had fished with Captain Butler “a ton” over the past 20 years but never for swordfish, was elected to take the rod, as catching a swordfish was on his bucket list.  The fish jumped soon after the hook-up, close enough the splash for to be heard, but it was too dark to get an idea of the size of the fish.  The fish “changed depth and angles,” said mate Mike Romeo but “never took over 200 yards of line.” As the hours went by the crew suspected the fish was good-sized.  Not until the pre-dawn skies grew lighter did they realize mammoth size of the swordfish.  The last half hour the fish was pretty much dead weight and was a test of will between the angler’s concern of breaking the fish off and fighting the current pulling the fish.  The fish was finally pulled through the tuna door at 7 AM but took all hands to jockey it into the cockpit.

Inside Rudee Inlet at Rudee’s Inlet Marina the swordfish would weigh an incredible 466-pounds eclipsing the former state record by 20 pounds!  The fish measured 150.5 inches total length with a lower jaw fork length of 98.5 inches while sporting a girth of 54 inches.

Permanent link to this article: https://vbsf.net/2019/08/29/virginias-new-state-record-swordfish-is-now-official/