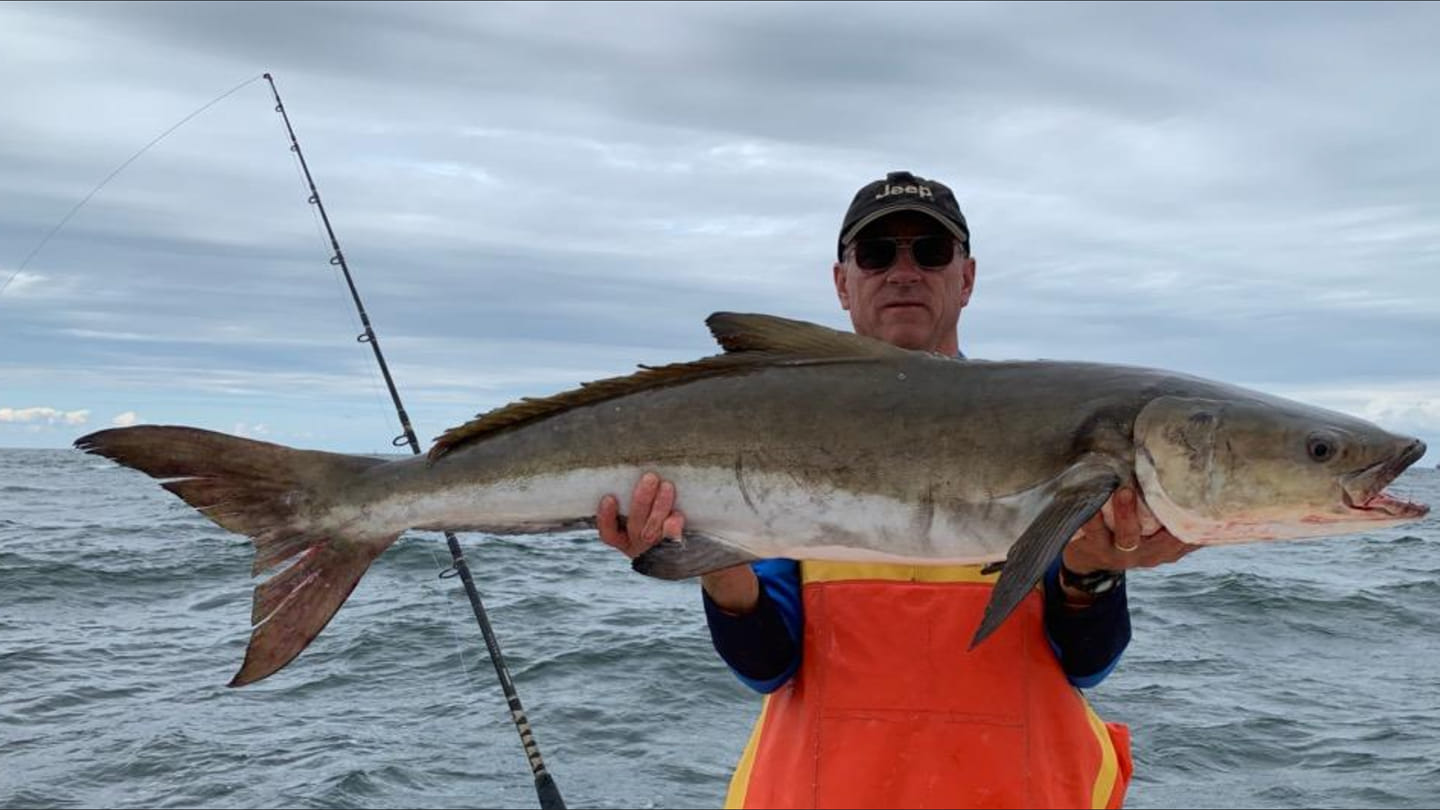 Starting next month, throughout the fall and winter we will publish the fishing reports biweekly.  But be sure and check in more often, because we will post breaking news and trophy fish reports as soon as they come in.

With a watchful eye on tropical developments to the southeast, local anglers continue to enjoy the developing fall fishery. But don’t dismiss the summer favorites just yet. Intercepting these fish as they prepare to depart the area can provide good opportunities for anglers.

Cobia are on the move as they prepare to head south and offer some outstanding top water action. Several boats reported cobia exceeding 50-pounds last week. The Virginia cobia season closes the last day of September.

Big red drum are still roaming about the lower Bay and around the shoals of the barrier islands. It is time for reds to begin showing more around the artificial islands of the CBBT. Fresh cut bait and live bait work well for this area. Big bull reds can debut in the surf lines along Sandbridge and the Wildlife Preserve at any time. A northerly blow will jump start some good drum surf fishing action. 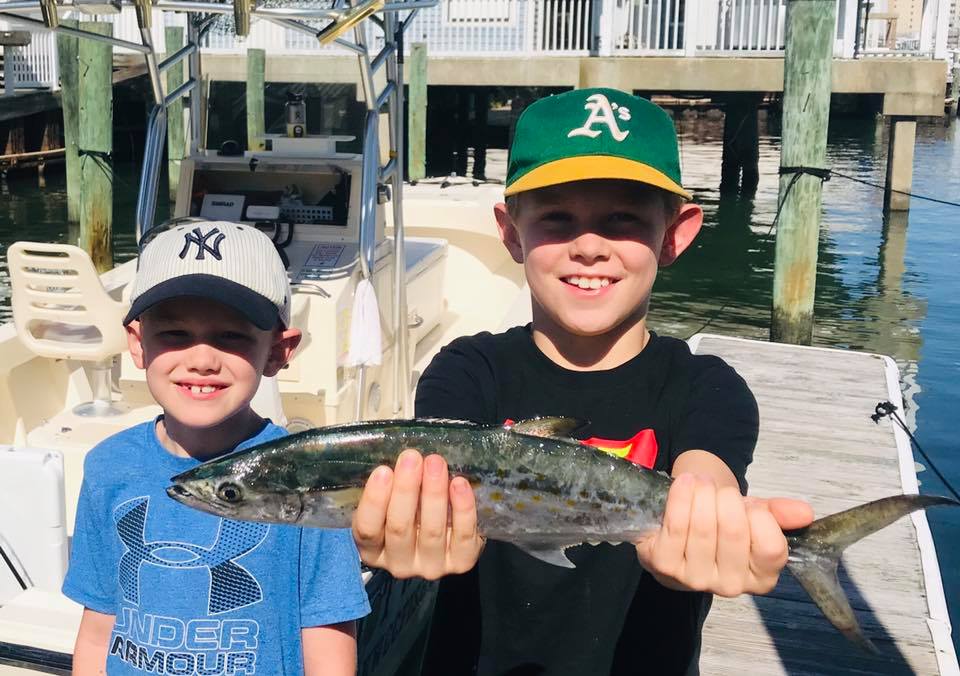 The most exciting news at the oceanfront is the start of what is hopefully an incredible king mackerel run. September is Virginia’s peak king mackerel season. Smoker kings have already been landed and they are crashing both live and trolled baits. Several have hit the dock weighing 50-pounds, or more. 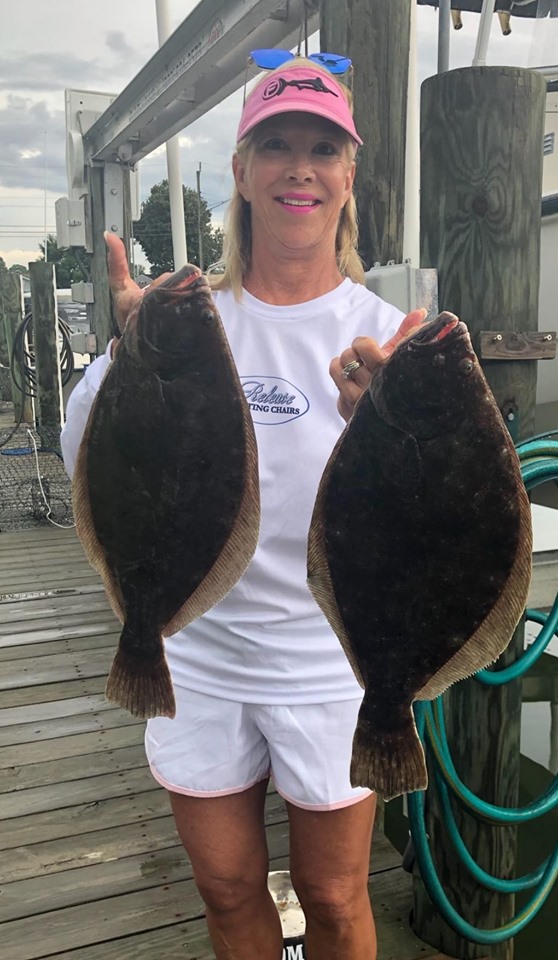 Flounder catches are improving along the coast and throughout the lower bay. Look for them around the CBBT pilons, near the rocks that cover the tunnels and around coastal reefs and wrecks. Many are caught around the jetties at Rudee and Little Creek inlets …. Congratulations to Jeff Murray, who took the lead in the Virginia Saltwater Fishing Tournament with a 10-pound doormat.

Buoys and wrecks are holding triggerfish and spadefish. Sheepshead numbers along the CBBT haven’t been as good as past years.

Speckled trout, puppy drum, spot and croacker are inside the inlets. Trout are available along the Poquoson Flats and in bay-side creeks of the Eastern Shore. 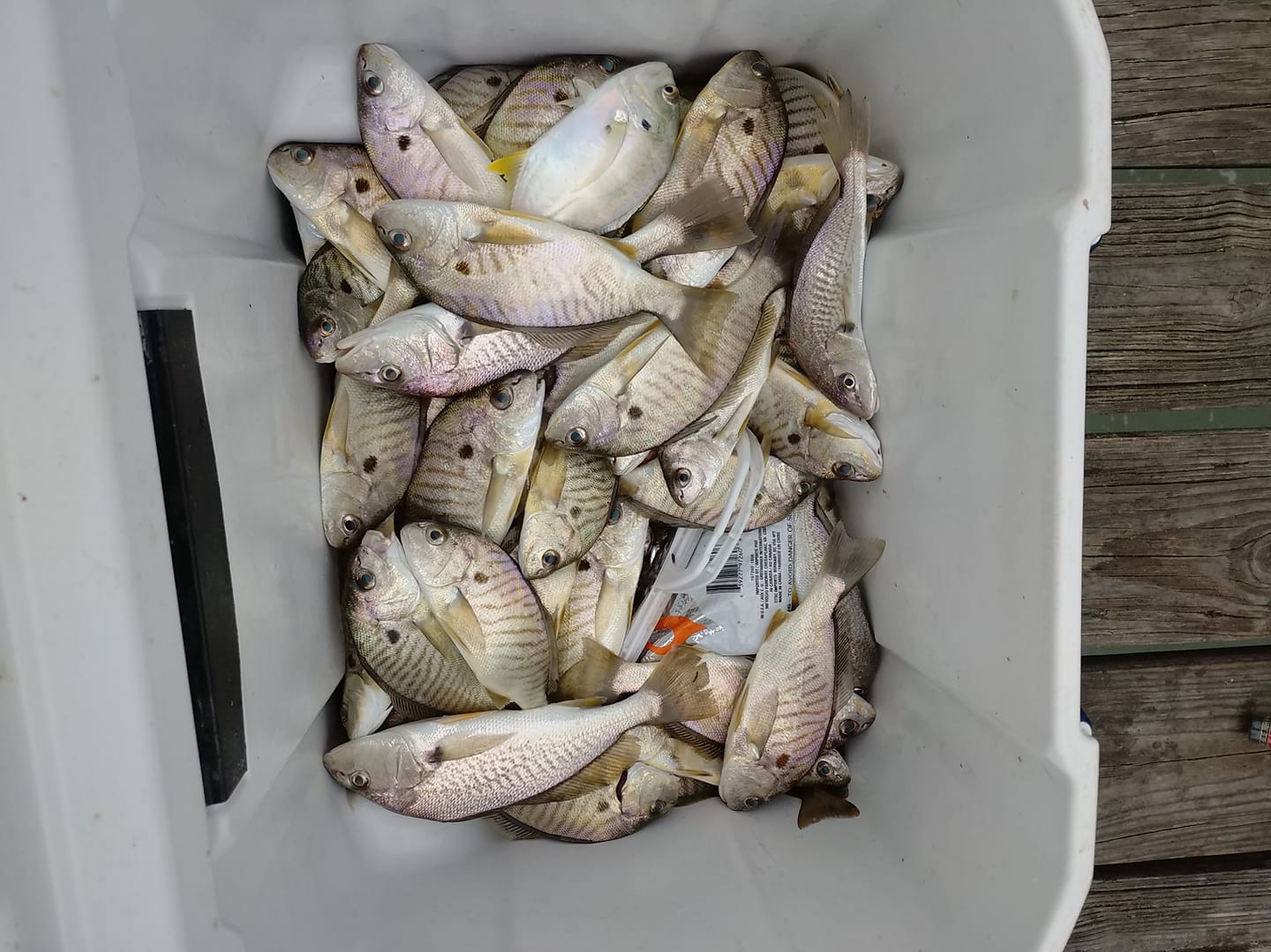 Surf fisherman and those fishing off the Virginia Beach Fishing Pier are catching lots of spot and some croaker, sea mullet, ribbonfish, sand perch and flounder. Red drum, puppy drum, speckled trout and cobia are also a possibility. 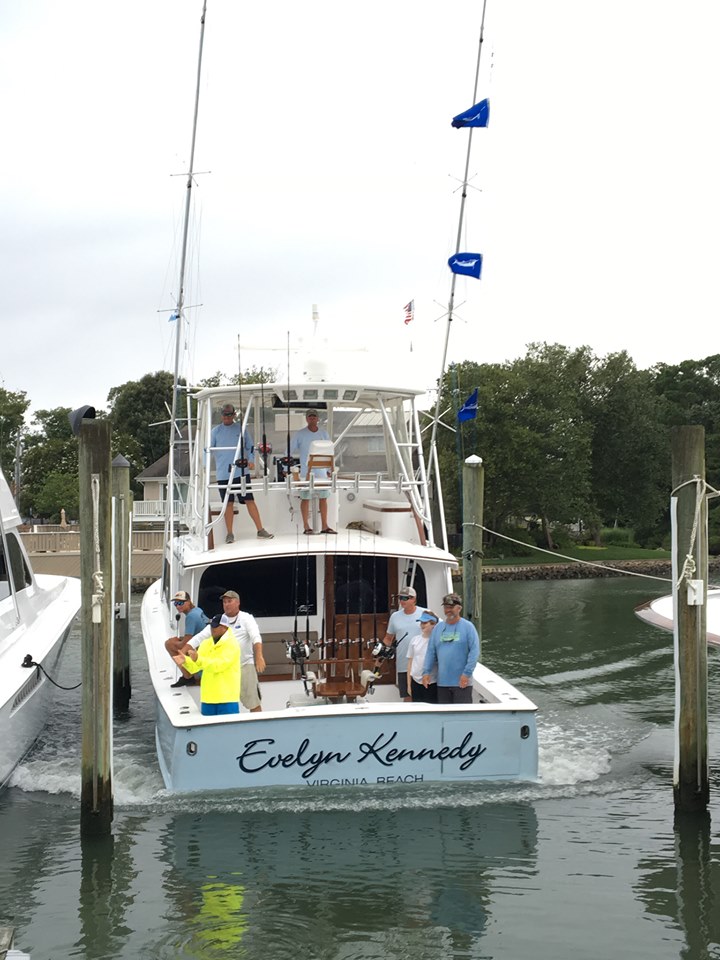 Once the effects of Tropical Storm Erin subside things offshore should be very good. There’s white marlin to our north that will be making their way into Virginia waters. Also, in the mix will be blue marlin, sailfish, swordfish, yellowfin tuna, dolphin, and wahoo. 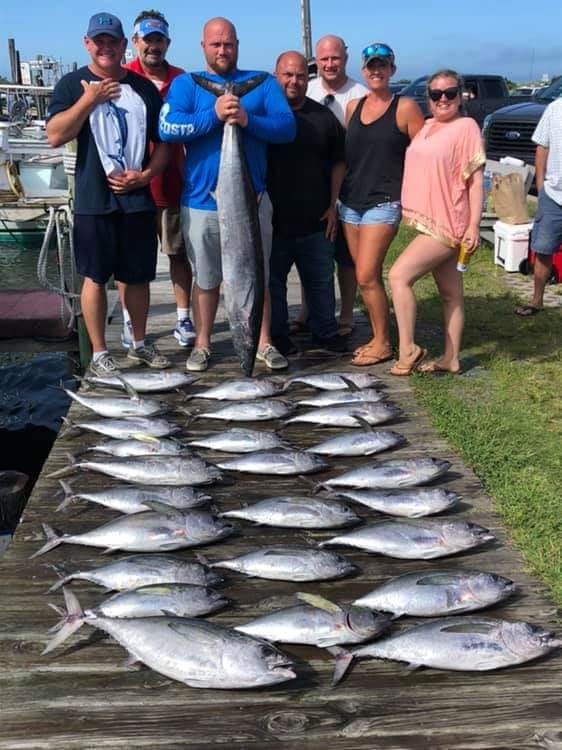 Surf anglers are catching spot and sea mullet. Soundside anglers fishing the Little Bridge on the Nags Head/Manteo causeway are catching a lot of small puppy drum along with a few trout and blacks drum.

Inshore boats are catching spanish and bluefish, and inside the inlet bluefish and specks.

Offshore boats are catching mostly yellowfin and black fin tuna and a few wahoo and billfish.

By now, you know Virginia has taken further striped bass measures ahead of ASMFC action. In addition to closing the spring trophy season earlier, the top 3 measures in the attached photo were passed by emergency action today. There will be a public hearing on these at the September VMRC meeting where they will be finalized, modified, or be rejected. There are further commercial actions planned for the November VMRC meeting. 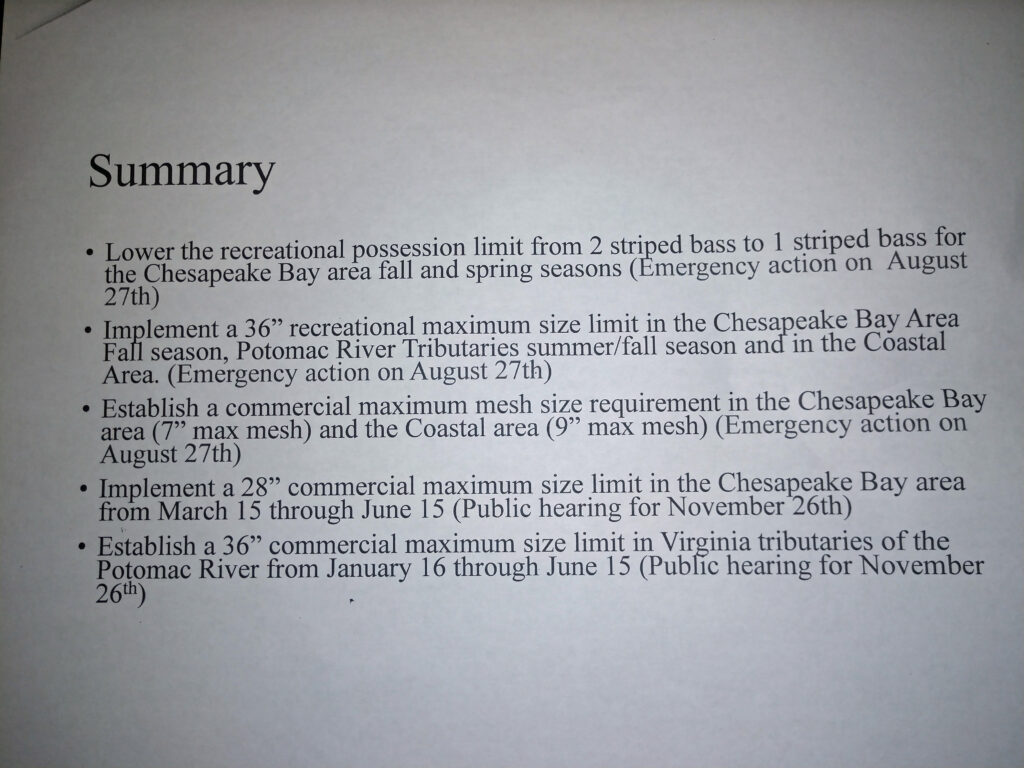 The recent stock assessment shows that striped bass are over fished, over fishing is occurring and there is a particular concern with spawning stock biomass (big fish).

Virginia’s actions are particularly concerned with protecting these big fish. The commercial actions taken and those proposed for the November meeting do nothing to limit the commercial quota but are designed to protect big fish. An original proposal was to place a 36 inch maximum on both commercial and recreational fisheries. Some fish over 36 inches will be caught with the small mesh nets but the thinking was better to apply these to the commercial quota than to require them to be thrown back, possibly dead already. But, at least one of my fellow commissioners thinks that the 36-inch maximum should apply to the commercial sector as well so this could be revisited especially if a bunch of big fish show in the commercial catch.

So, while Virginia is taking these actions, what is ASMFC doing? They are taking two paths, a fast one and a slow one, addendum and amendment. The addendum actions are planned to be in place for 2020. The amendment process takes longer. The addendum is not really doing anything directly for the big fish. They have just decided that there needs to an overall reduction in catch of 18%. They are looking at things like increasing size minimums which may help catch numbers but not big fish. They are seeking public comment now for this process. One thing they are looking at is whether to apply this 18% reduction to both recreational and commercial fisheries or to make the cuts 1.8% commercial and 20% recreational. The amendment process will more directly address the spawning stock biomass but this process will take at least a couple of years. Virginia is not waiting to protect the breeding stock.

I had asked VMRC staff to look at ways to allow some limited recreational catch of big fish and everything under the sun has been looked at. A big-fish tag has some support but this is where we are now. The recreational changes more than satisfy the 18 or 20 percent reduction that will be required by ASMFC for 2020 and Virginia is way ahead of ASMFC in protecting big fish. Whether they decide a 1.8 or a 18 percent reduction is required by the commercial fishery will decide any required quota reduction to the commercial sector.

Permanent link to this article: https://vbsf.net/2019/08/29/late-summer-fishing-action-hot-changing-regs-for-striper-season-on-the-way/