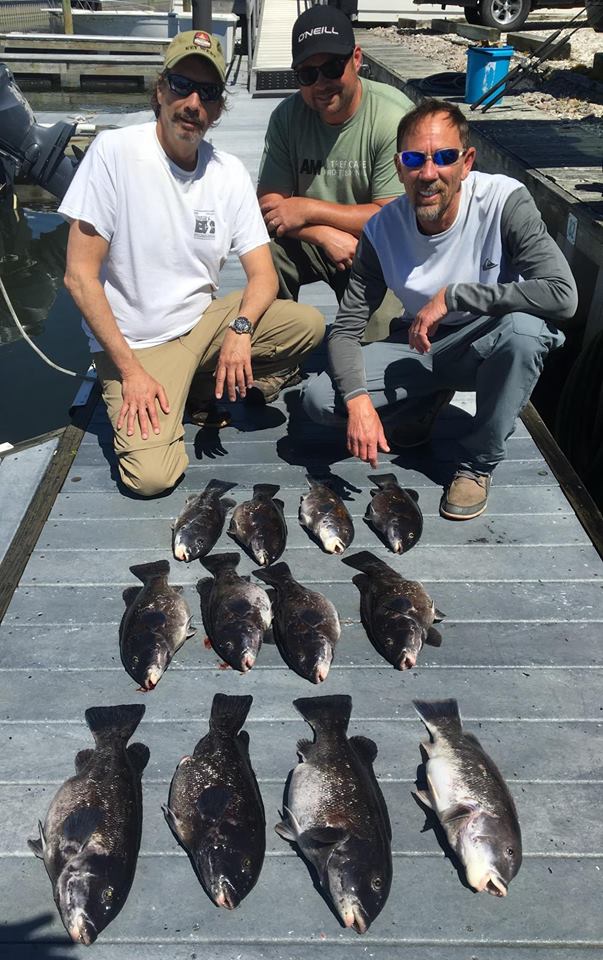 Tautog fishing remains good to excellent. Look for them around underwater obstructions like wrecks, reefs, rocks and the pylons of the CBBT. Captain Craig Paige and crew on the Paige II enjoyed good tog action this week (above). The Virginia season closes May 15th, so you need to go ASAP! The taugtog state record was set in 2012, a 24 lbs 3 oz fish caught by Ken Neill.

Flounder, speckled trout and bluefish are starting to bite inside local inlets. There were nice keeper size specks caught in Rudee Inlet this week. The best flounder catches are still coming from Wachapreague, Oyster and Chincoteague on the Eastern Shore. A few flounder have been caught along the CBBT. Numbers will continue to improve as the water warms.

Sheepshead are already being caught in the bay. Their numbers will increase in May and peak in early June. The best baits are fiddler crabs or mole crabs, fished very close to structure.

Red drum are on the shoals at the mouth of the bay, Latimer Shoal and the shallow bar near the north end of the CBBT. Next month as the water warms and the number of fish increases, anglers will begin having success sight casting near the islands of the CBBT.

Black Drum are still along the shallow channel ledge running from Fisherman’s Island to north of Cape Charles. Look for boats anchored close together near Kiptopeake, the Cabbage Patch and the Concrete Ships.

Anglers fishing off the Virginia Beach Fishing Pier are catching some blues, trout, small black drum, roundheads and a few spots and skates.

Hatteras surf anglers are catching mostly sea mullet, sharks and blow toads. They are still picking up a few citation red drum at The Point in Buxton along with some puppy drum. There have been some very nice pompano caught in the surf to the south, I look for a good pompano season on Hatteras Island this year. Anglers fishing north of Oregon Inlet are catching sea mullet, trout and puppy drum.

The yellow fin tuna bite off Oregon Inlet remains very good and now you can add mahi mahi to the list. Captains are finding a nice class of fish with a few gaffers in the mix.

The charter boat Rock Solid ran across some cobia on the ride in from offshore. They were able to land the first reported cobia at the OI Fishing Center this year.

Fishing out of Hatteras Inlet, anglers are enjoying excellent mahi mahi and black fin tuna fishing. The wahoo and yellowfin tuna bite was scattered this week. Inshore anglers are finding bluefish and spanish mackerel. Spanish mackerel numbers are on the rise.

Permanent link to this article: https://vbsf.net/2019/04/27/inshore-fishing-picking-up-as-water-warms/